When the topic of the dangers arising from drones is discussed, there are often two radically different points of view. One side is completely disinterested in the topic and for the others the copters are dangerous weapons that should be forbidden.


This technical article is a rational analysis of the hazard potential of the drone and suggests solutions and countermeasures.

Attention: At the end of this article there are illustrations of injuries caused by drones. If you are squeamish, do not scroll to the end of the article. Another warning is shown further down.

The main sources of danger on a drone are :

The risks in detail:


kinetic energy of an impact

The energy of an impact can be calculated by using the formula for kinetic energy:

example of calculation based on a DJI Phantom 2

Calculation based on a Hotliner:

As comparison the projectile from an airgun in Germany has a maximum of 7.5 Joule, measured at the muzzle (aka. Muzzle energy).

Even though a drone unleashes a certain amount of energy on impact, the structure of the apparatus is such that the energy does not work in a puncual manner. The structure is simply not rigid enough and becomes deformed. The only exception to this is the motors which are compact and stable enough to inflict considerable damage.

The risks caused by the propellers

The risks caused by the propellers applies specifically to the following:


Many pilots are not aware of the power that lies in their propellers. Watch this video and see for yourself


Takeoffs and landings from the hand is careless

Pilots who let the model take off and land from their hands are especially vulnerable to injury, this is simply careless! 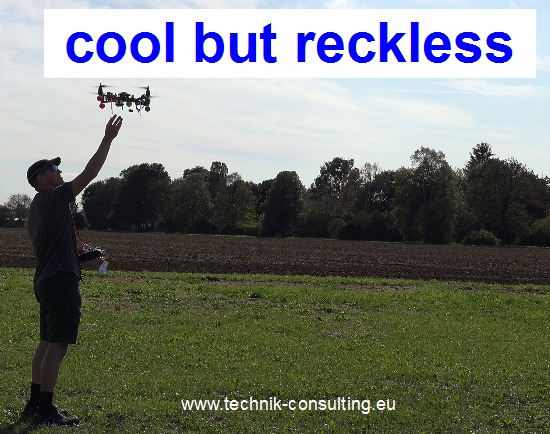 Take the following into consideration regarding hand held take-offs or landing.

Injuries to a realistic hand out of ballistic gelatin

These illustrations show the injuries caused by a propeller to a realistic model of a hand and forearm.
The model is made out of high grade ballistic gelatine which is used for such tests by testing institutes and military organisations. The ballistic gelatine has the same characteristics as human tissue such as skin and muscle. Only cut wounds that would sever bone are not realistically covered by such tests as there are no bones in the gellatine model. 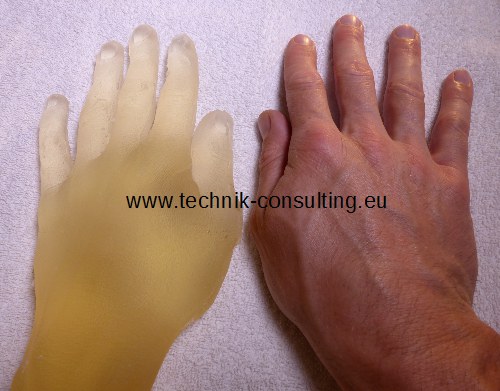 Everything still on the ballistic gelatine model 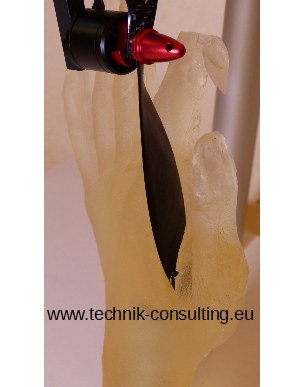 A deep cut between the thumb and the index finger by a carbon fiber (CFRP) propeller. As there are no bones in this position the wound in the ballistic gel corresponds to that of a real hand. 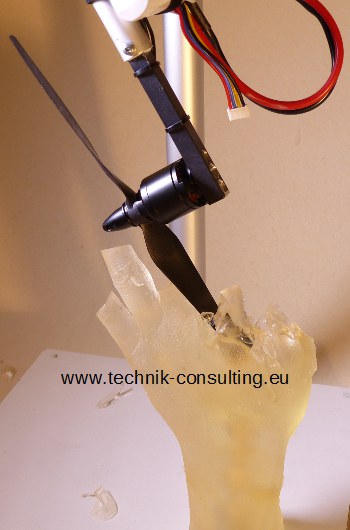 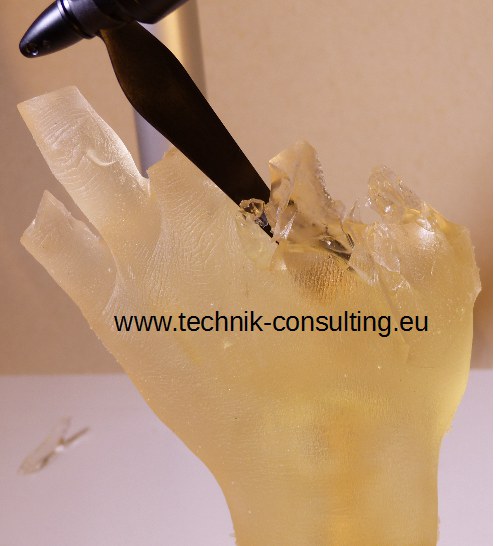 The fingers are now amputated 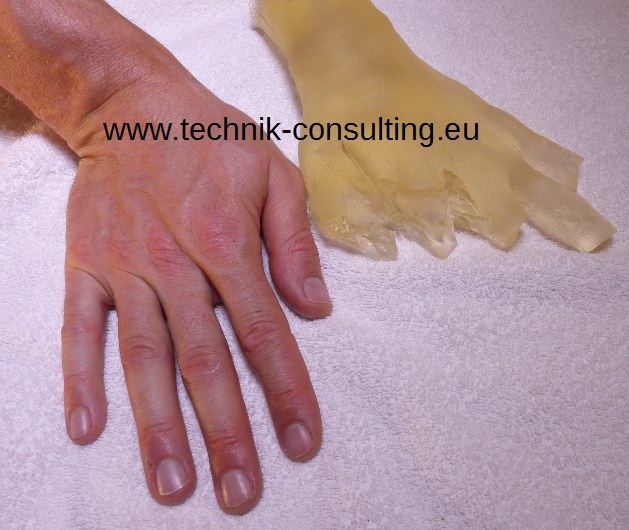 The comparison with the original. 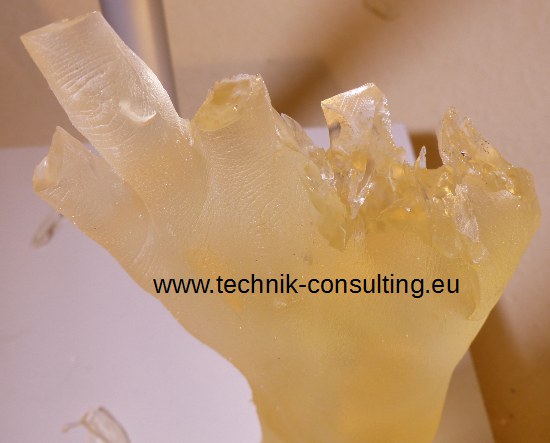 What is left of the ballistic gel hand model

In reality the bones would give the propellers somewhat more resistance and probably prevent the complete amputation of the fingers. Despite this serious injuries are to be expected. In addition to the injury to blood vessels which would cause heavy bleeding, the severing of nerves would lead to permenent loss of feeling in the fingers. Such wounds in the face are much especially dangerous.

The danger of injury caused by fragments of propellers flying around has dropped dramatically in the last few years. Due to improved production techniques and the use of more durable materials this risk can now be rated as low. Despite this fact damaged propellers should be replaced. This is especially valid for carbon fiber (CFRP) propellers that have had contact with obstacles. The  carbon fiber (CFRP) propellers can appear externally almost undamaged, but have internal fractures that would result in complete destruction under high load. Glass-fiber reinforced plastic (GFRP) propellers are less affected by this, but as with other propeller types, to be on the safe side, should be replaced by visible or expected damage. The cost of a propeller is only a fraction of the cost of the total model, but when a drones propeller is destroyed it leads to crash of the whole model.

Hearing damage by propellers is rare and predominantly caused by smaller propellers at high revs in acoustically hard surroundings e.g. concrete walls. This is for example the case when the model is flying close to the pilot in an underground garage.

Another source of danger is from the rechargeable batteries. Modern Lithium polymer batteries have a high energy content. In the case of a crash where the battery is either damaged or where a short circuit happens because the electronics is damaged there is an immediate danger of fire. Especially pilots flying their drones in summer in a dry environment should be specifically consious of this risk.  If a Lithium polymer battery is on fire it should never be attempted to be extinguished with water. Instead a fire blanket, sand or a powder extinguisher should be used. The practical solution is to take a simple fire blanket with you when flying high performance models.

The simple solution : keep your distance

Takeoffs and landing manoeuvres on the ground and with 5 meters safety distance to all people should be the preferred solution. 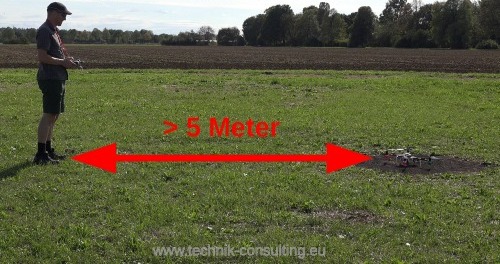 The risk of injury is 1% when there is 5 metres to the model, and when the drone is fly in an uncontrolled manner. With 10 metres distance the risk is reduced to 0.25% (calculation see below)

To minimise the risks simply adhere to common sense.

Fail-Safe scenarios - there is only one safe scenaro

A couple of comments on some different Fail-Safe scenarios. GPS is only precise under optimal circumstances. Trees, buildings, thunderclouds etc can negatively affect the reception. We have tested premium quality GPS receivers and under adverse conditions, e.g. rain clouds have seen differences of up to one kilometer compared to the correct position. These receivers do correct the position incrementally, but in unfavourable cases the control system can have an incorrect position. A flight over a longer distance with a drone is then dangerous.

In my opinion there is only one reliable fail-safe behaviour: Turn off the motors immediately. Even when under some circumstances this means that the model is a total loss. All other scenarios such as "Position hold", "Fly Home" etc are hazardous. Consider the fact that there must be a problem that activates such scenarios. No radio reception means that there is generally reception problems which can also affect the GPS signal reception. A model flying around in an uncontrolled manner can cause more damage than a model that simply falls onto a small area. As good as the GPS functionality is, it should not be blindly relied upon.


Typical sources of errors with drones

What is the background to this article?

This article was written because some drone flying friends have been injured, some seriously, while practising their hobby or profession - and I want you to avoid this !

Please do not hesitate to get in touch if you have any questions.

To calculate of the probability of getting hit by a model that is out of control we can use the following method. 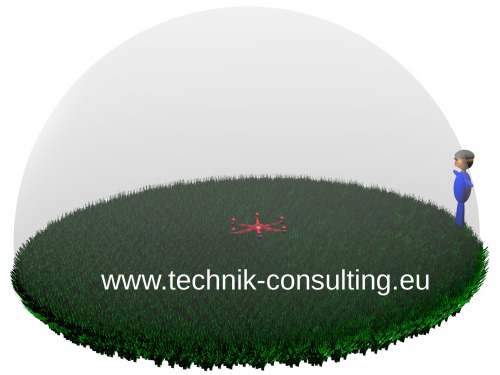 The area of the circular floor of the hemisphere is :

Where R is the radius of the circular base and that of the hemisphere and denotes the distance to the model.


The probability of being hit is the relationship of the areas to each other.

In the example calculation the probability of being hit with a 5 m initial distance to the model is ca. 1%


Attention:  Some pictures of injuries by drones are shown below. If you are squeamish and cannot bear the sight of blood, do NOT scroll down.

Pictures of injuries from drone accidents 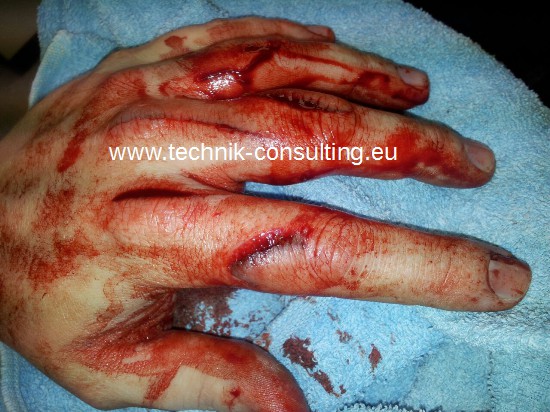 Propeller incorrectly attached and a take-off from the hand. The cuts only just avoided the nerves. 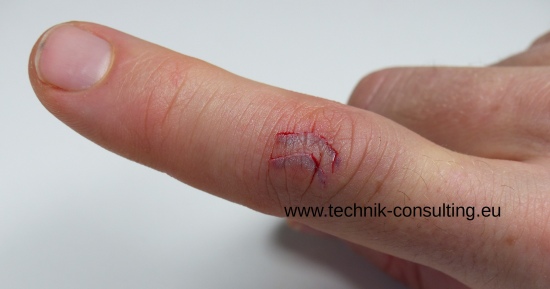 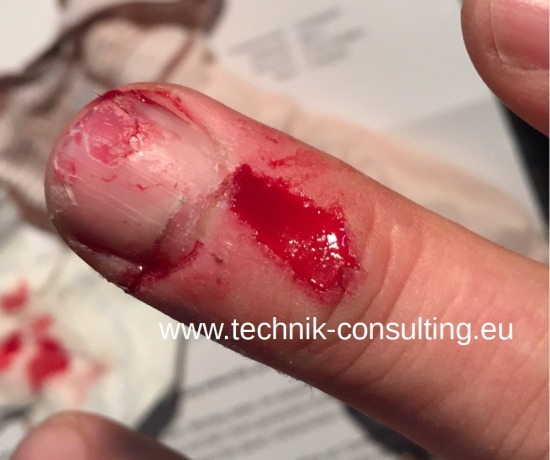 250er Racer: When bending and reattaching the quadrocopter with the clothes the gas lever touches. Surface injury and injury to the nail, but fortunately not deep. 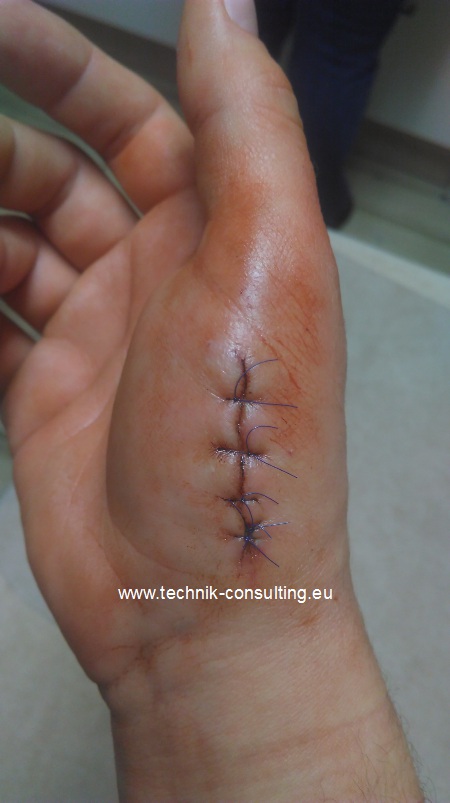 This injury arose when the drone was caught out of the air. A propeller hit the hand. 2204 motor with 6 inch propeller.

If you have been injured by a drone and posess pictures, feel free to send these. Ideally with a brief description and a written permission to publish the pictures on the website.

Please use the contact address to send the pictures.