Fortnite Battle Royale is a great game. However, some people have difficulty with the game to resist. This article highlights why the game represents a certain addictive factor (computer game dependency or computer gambling addiction).

At the following warning signs go to the counseling center

For example, if you or your family notice the following warning signs, please contact a counseling center:

1. I can not stop playing - only with great difficulty.
2. When I'm not playing, I keep thinking of Fortnite Battle Royale and would do anything to play again.
3. I have no other interests and I am only gambling on Fortnite.
4. Since I play Fortnite, my academic or professional performance has dropped significantly.
5. I renounce sleep to play Fortnite.
6. When I get caught playing, I look for excuses.

But why does the game Fortnite Battle Royale create dependency on some people so quickly?

But why is Fortnite Battle Royale so dependent?

The reasons are many.

Free and also for children

The game is free and easy to install on different platforms. Whether PC, Smartphone, PlayStation and Co. This will reach a very large audience.

There is always something going on in the game. There are only a few breaks. Even waiting for other players can already be played. The lack of longer breaks can be completely immersed in the game.

There is no break during the game. You must inevitably hide the environment.

You can customize your character individually until you like it. Accessories such as dances, spray cans etc. complete everything. So you have countless possibilities to customize the character according to your wishes. Of course you want to show that to others and play.

Whether alone, in a team or other games. There is the right game mode for almost every taste and mood. → sense of power over the game.

Getting under the last players is simple by the way. You just have to hide long enough. With this strategy you will probably not win a game, but the tension is still there. Did he see me, where is the next hiding place? ... 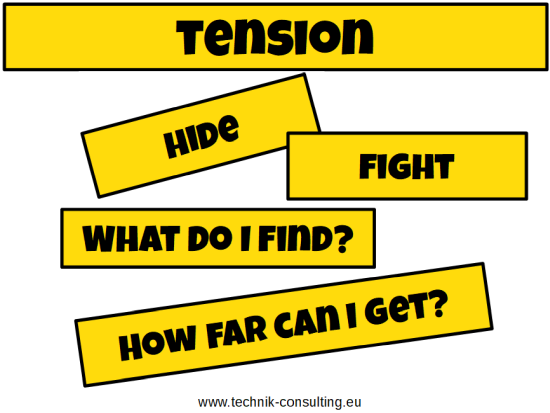 When fighting you are maximally tense and want to win. Once you have won, it goes on and you are happy. Has been lost most excuses sought and started a new round. 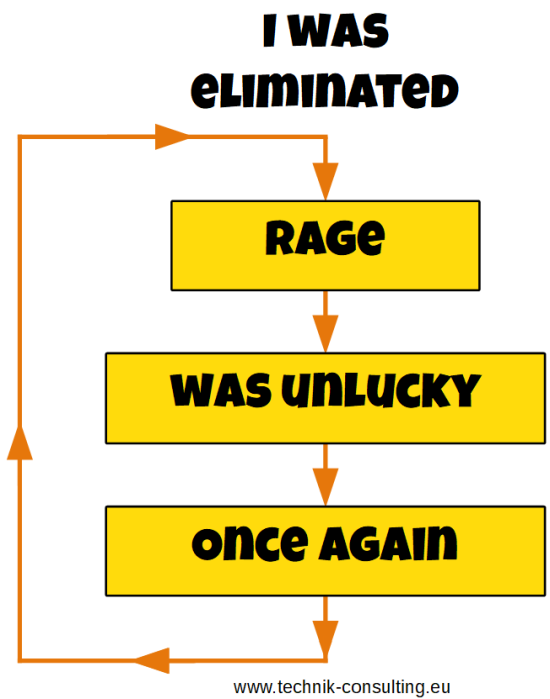 The bus route is random. Everyone can decide for themselves where and when he jumps off the bus. Everyone can choose their favorite destination for themselves. The composition of the players varies constantly. Rarely that you meet several times in different rounds on the same player (exception: professional player). At some point you will have to fight. Against whom is coincidence.

Treasure chests and other loot are also randomly distributed. If you get your desired items, this releases feelings of happiness (dopamine) and you keep playing. If you eliminate someone, you'll get double the luck.
1. You have eliminated someone → cool
2. He has great items that you take to you → supercool or "best product" 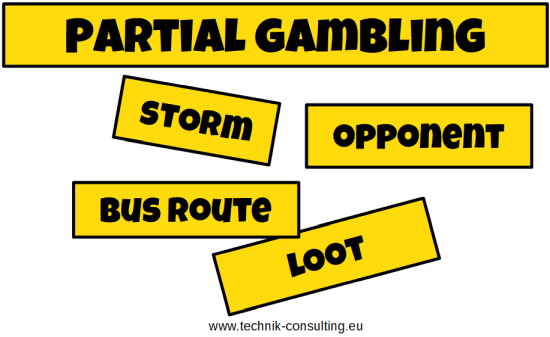 Even small successes, such as "I am under the last 10" or "I have eliminated one" again free happiness hormones (dopamine) and encourage you to continue playing.

During the game challenges can be solved. If you manage one, a feeling of happiness will set in again. It does not matter if you are eliminated shortly thereafter. This gameplay is a good motivation for the worse players to keep playing.

If you are eliminated yourself, you can watch the opponent. The following thoughts often come up:
1. No wonder with the loot → I just had bad luck this round, so again.
2. He is super good. I want to be as good as that → go on.
3. I would have had to win, but I just had bad luck → again
4. In the next round I'll do one really well.
5. You can cheer if he succeeds. Similar to a football team. Of course you'll be happy if he wins. If not, you are looking forward to the next ... and so on.

There are numerous events in the game Fortnite Battle Royale. These range from smaller challenges to world championships.

Some young people have been able to earn a lot of money and recognition with the Fortnite game. You try to emulate these role models. Note: Not infrequently, professional players play 10 hours each day and more. For the normal adolescent this is not feasible or meaningful.

If you have eliminated someone (happiness), he can watch you. You can see this in the lower left corner of the eye symbol and the number next to it. The more viewers you have, the more tense you are. Finally, you want to show your skills.

At some point, I will win a round. If that has already happened, I want to win more rounds → it goes on and on.

With every update, there are changes in the game. You can explore new places or solve other tasks. It never gets boring.

The landscape is huge and rich in detail. You can always discover new places. This will keep you happy and keep playing.

At school you belong to the Fortnite group and have confirmation that the game is right.

Meaningful use of the game Fortnite Battle Royale

You or your parents should pay attention to the following points (note: not completely and individually different).

Set yourself a reasonable time limit and keep it. If other areas in your life are affected, such as school grades, sleep and other hobbies, the playing time is too long.

Can you live without Fortnite for two days or even a week? Try it. If it works out, you're pretty much not computer game dependent. In addition, you are better in the game after a break.

Most want to get better in the game. It does not work with meaningless "gambling". Set yourself meaningful goals like:

Write me what else can make you addicted to the game.

Fortnite? Talk to me.