In order for a quadrocopter to remains stable in the air several conditions are required. Among other things the propulsion system (motor controller or ESC, motor, propeller) has to be accurately and quickly. It has to work perfect together with the Flight Controller (FC). Whether long range flight, height altitude flight or just for fun.

If the propulsion system (propeller, motor, motor controller) is too slow or inaccurate a quadcopter can not keep in the air. The model crashes. To check the motor controller (ESC) of a quadcopter under realistic conditions a corresponding test stand is necessary. ESC is the abbreviation for  Electronic Speed Controller.

The motor test stand for an outrunner 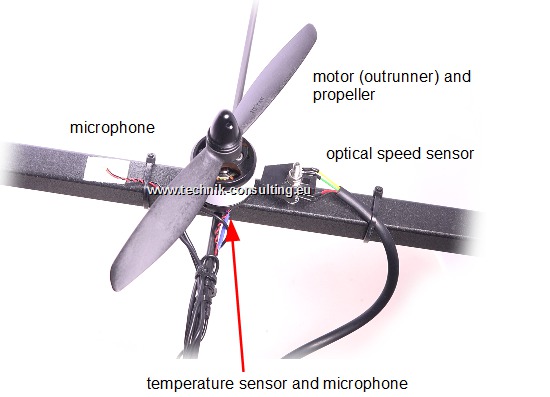 The entire engine unit is housed in order to protect into a thick tube of Plexiglas. This is necessary because serious injuries can be caused by the propeller. The thrust can also be measured. The tube is so dimensioned that an impeller effect is negligible.

For data recording the following sensors are available.

optical speed sensor on the motor

At the motor or the air screw mounting there is a light/dark marking which is scanned by a photocell. This signal is amplified. It was intentional to use no speed sensor which operates directly by scanning the motor pulses. The motor may lose steps and this would not be noticed.

temperature sensor in the coils or windings

There is a small NiCr-Ni-thermocouple with a measuring amplifier to the coils of the motor. In addition there are further NiCr-Ni thermocouple on the motor controller or ESC and the battery.

microphone into the coils or windings

In the motor there is a small microphone. About this the operating noise will be recorded. Bearing damage can be also detected.

current measurement with the Hall effect

The current flow to the motor or by the motor back (during braking) is detected by a current sensor with high resolution and sampling rate. It is a current sensor that utilizes the Hall effect. The result is no voltage drop as when using a shunt.

The control electronics sends corresponding control pulses to the motor controller. About the speed change can be detected directly such as the ESC and the motor controller react. All this under almost real conditions with engine, propeller and LiPo battery.

special features of the test setup

The data are collected with a high data rate in the microsecond range. Thus the data can be compared the time base of the data record is synchronized with the drive pulses. Just as the jump in the drive signal.

In the event of cases, several safety devices are on the motor test stand.

The test program should be as close to reality. For this reason the following scenarios are used:

Operating points of the propulsion system during the test

(power with which the engine is operated.)

Deviations from the operating points

Step responses of the propulsion system

The test cycle is as follows:

In total 18 test scenarios are run through. The motor is always under a medium or low load when changing the scenarios. 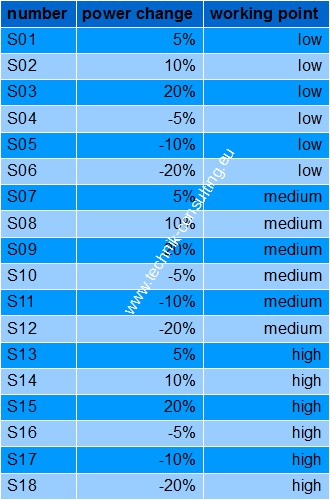 If required the scenarios can be adjusted as desired. It can be measured pulses, various jumps, ramps and vibrations in the drive signal. For an initial characterization of the propulsion system however the step response has proven itself with the 18 scenarios.

Some selected controller and measurement curves are discussed next. It concerns with the motor controllers to the UltraESC 20A and the JETI HiCopter 30 opto. Versions of May 2015th

The motor is a 2208 outrunner with a 6 inch propeller with 4 inch pitch.LiPo battery with 2S was used.

This scenario is important for a stable descent. For the ESC or motor controller and motor, the reaction time is usually due to the low rotational speed slightly slower than at higher rotational speeds. 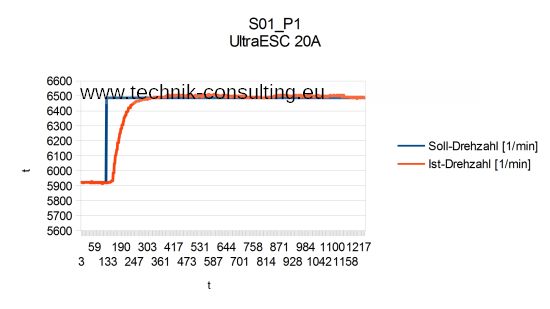 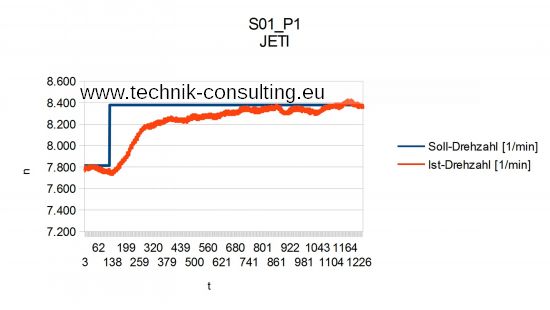 The scenario S08 is important for a stable hover in light winds. The faster and more accurately the motor controller (ESC) the more stable is the model in the air. 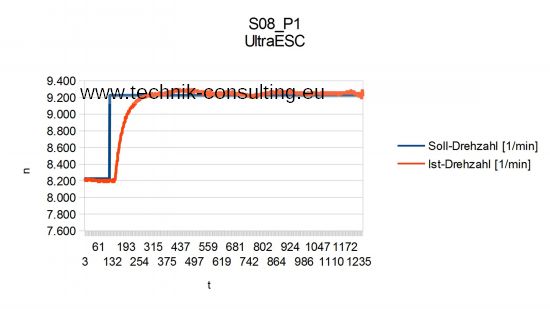 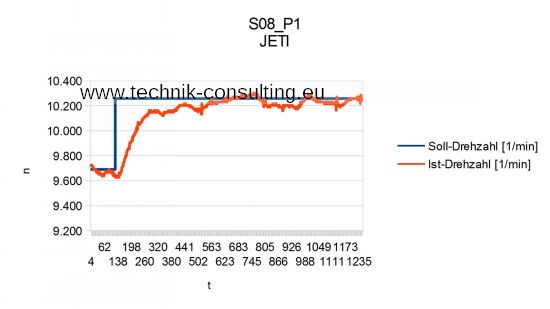 The scenario 18 (S18 short) is important for a quick climb and a strong regulation by the flight control (FC) example due to strong winds. Here the engine power is to be reduced suddenly at a high level. Here have the motor controller a problem if they can not accurate slow down the propeller. 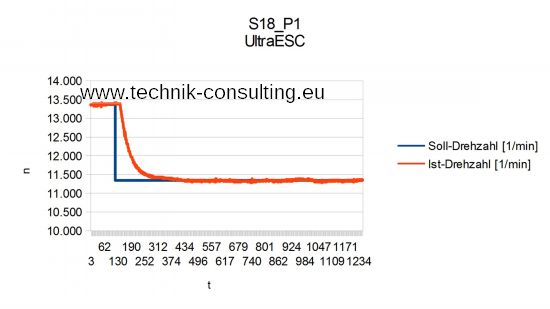 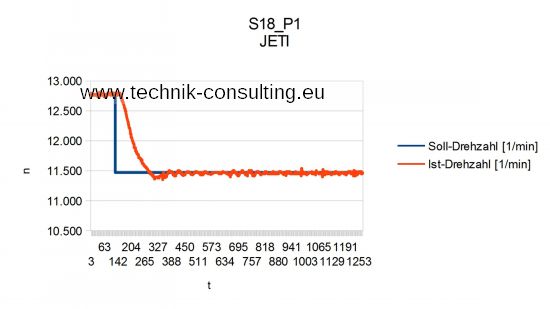 In this scenario the two measured motor controllers are almost equal. The motor controller shown above is somewhat more precise than the bottom measured ESC. In flight both regulators will behave similarly at high power and sudden power reduction. The ESC shown below still shows little oszillations but these are expected to remain virtually invisible in flight under these conditions.

Another way to analyze the motor controller is the an audio analysis. The following procedure is useful.


Insert in the program corresponding markers before and after the jump. Measure the frequencies. To come from the determined frequency to the speed, multiply by 30. Have you determined for example 256 Hz this corresponds to a speed of 256 Hz * 30 / (Hz * min) = 7.680 1/min.

[bold | Why 30 times] If you have a 2-blade propeller this per revolution generates 2 signals. To get from Hz (cycles per second) in revolutions per minute, you have to take the value times 60. Short 60 divided by 2 = 30. In a three-blade propeller according to times 20. 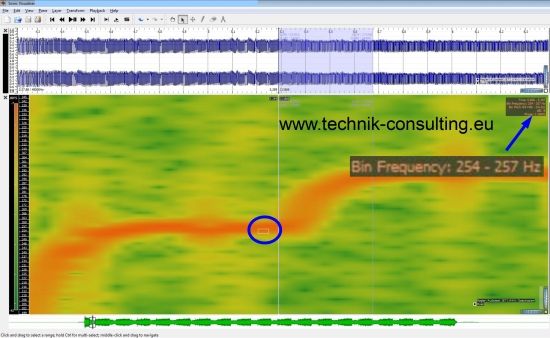 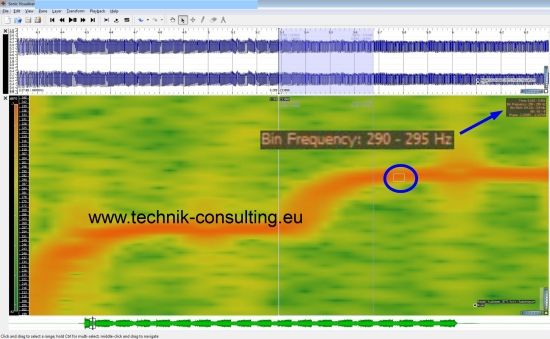 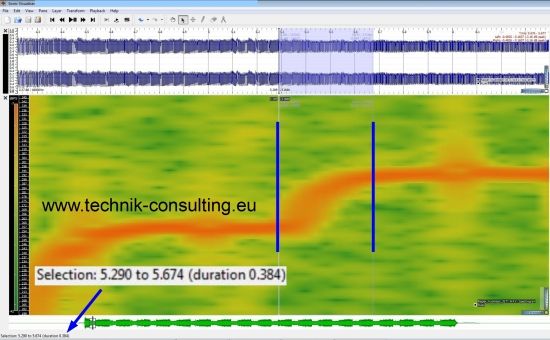 The time to come to the new speed approximately equal to the control time. From the spectrogram result approximately 0.384 s or 384 ms. 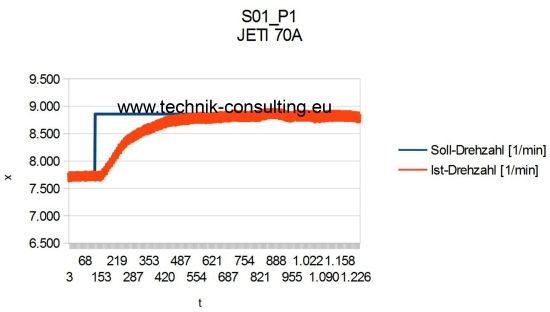 With the values of the motor test stand the audio spectrogram is in good agreement.

Video incl. Spectrogram of the JETI-regulator 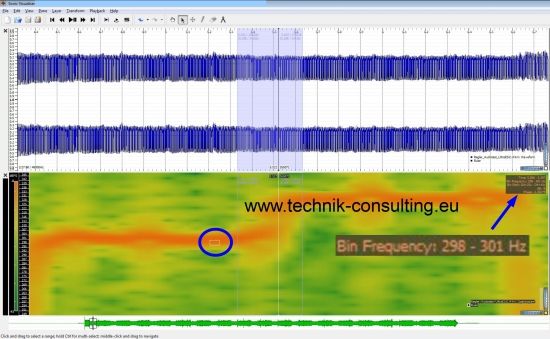 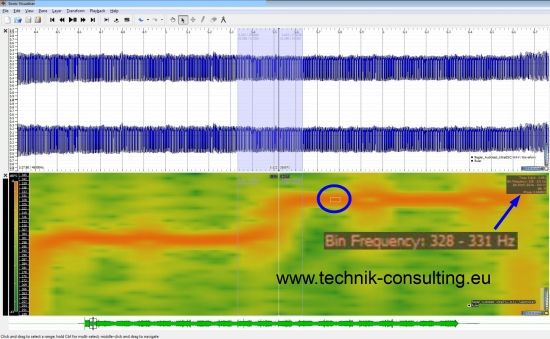 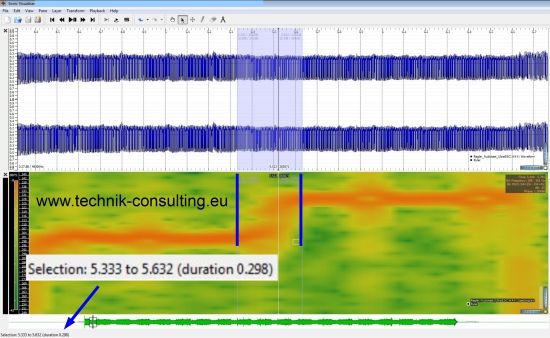 The time to come to the new speed approximately equal to the control time. From the spectrogram result approximately 0.298 s respectively, 298 ms. 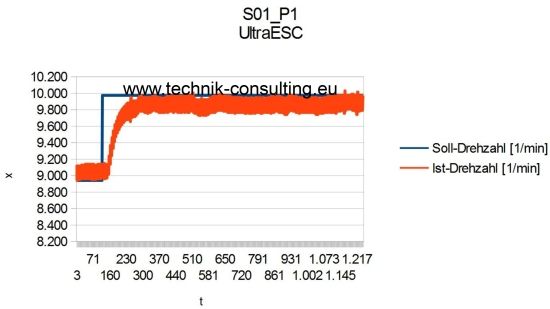 
With the values of the motor test stand the audio spectrogram is in good agreement.

A spectrogram shows how the frequency changes. This is precisely the time it takes for the propulsion unit to arrive at the new speed. Corresponding markers before and after the jump give approximately the regulation time. Note that a possible dead time of the controller with this method can not be detected.

Downside to the audio analysis means spectrogram is the high cost in time and the risk of errors. An advantage is the simple implementation.

You see how important is a well-selected motor speed controller. Even a very good working Flight Control is unable to keep the quadcopter stable in the air with a bad motor controller. When hovering a quadcopter then acts restless. The ESC is subject to certain limits. The scheme can not be any fast because very high currents would then flow. For this reason the ESC has a small ramp that does not change the output signal abruptly. Optimizing the engine controller is the balance between control speed and current flow.

In the measurement results shown here neutral tests carried out.

We can measure and analyze your drive unit or you want to optimize it. Talk to us. We also measured servo motors and model servos.